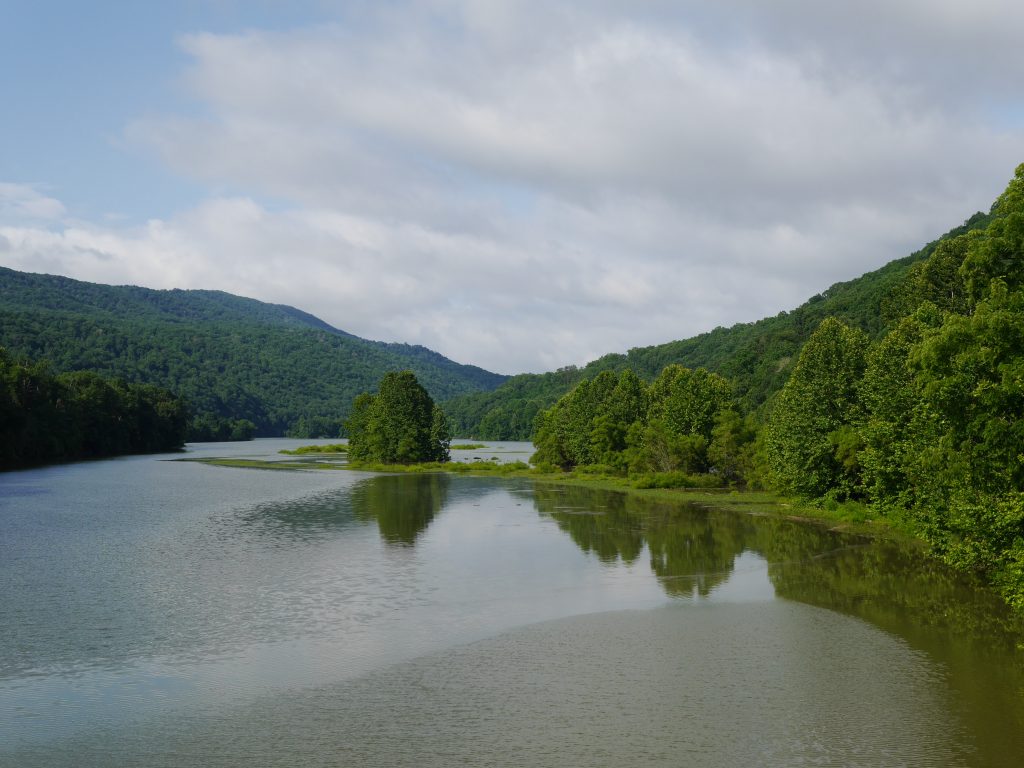 Growing up in central New York…

Wait, we need to get something straight before I go on. For those of you that just read “NEW YORK” and immediately picture the island of Manhattan, CENTRAL New York is 6 hours north west of NYC and nothing like the CITY that never sleeps. See previous blog, “Head to the (NY) mountains” for more on this…

As a kid, I spent a lot of time visiting New York State parks. One of these, Verona Beach State Park, was a 15-minute drive from my house, and on occasion, I would ride my bike there. It was also a popular camping destination for my family because it was so close to home that my dad could work the whole week while the rest of us stayed at the park. This particular state park is 1,735 acres, so from my frame of reference, about 10 times the size of my grandfather’s farm. Other memorable parks I went to include Wellesley Island (1,000 Islands), Lake Delta, The Adirondack Mountains, and several smaller parks my grandmother would want to go see within a day’s drive, probably to see the flowers.

Other New York State Parks are very similar in size (and hear me out, this will make more sense in a minute,) ranging from a few 100 acres to just over 2,000 with couple outliers as exceptions, and they typically offer a similar setup and amenities. Yes, even New York City has State Parks; the Franklin Delano Roosevelt Four Freedoms Park (4 acres, Manhattan) and the Grantly Plaza Start Park (12 acres, Queens) are examples of these. The smallest of the NY State Parks is the 3-acre boat launch on Conesus Lake, with the largest being Allegany State Park at 64,800 acres.

So, the thought of exploring national parks across the United States struck me as, “the same but different” in relation to the state parks that I had visited as a kid; we’d pull up, wander around for a few hours, and after seeing most of the park, head out. On to the next. 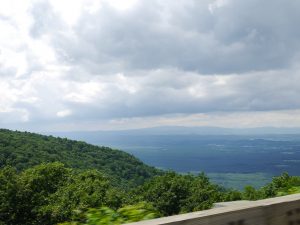 Our first national park we went to was Shenandoah National Park. We had just left our first campsite at Bolar Mountain Recreation Area, which felt a lot like what I had experienced at Verona Beach (NY) state park as a kid. At Shenandoah, we pulled up to the check-in station and proudly handed the park ranger our “America The Beautiful” pass we had purchased the day we decided to embark on this trip. The pass offered by the National Park Service gets the card-holder UNLIMITED access to National Parks for 12 months, an exception deal if you use it more than a couple times. It did not take long for me to realize that we had signed up for more than we expected.

The park ranger greeted us with a brimming smile and a warm welcome. We explained to him that we were passing through for a couple of hours and wanted to walk in the park and take some great pictures. With a little bravado, he declared that there are 2 great spots to go on the north side of the park. He swiftly explained the first spot was 7 miles in, but there was another spot after mile marker 20, however we might be interested in the other side of the park, but that was 80 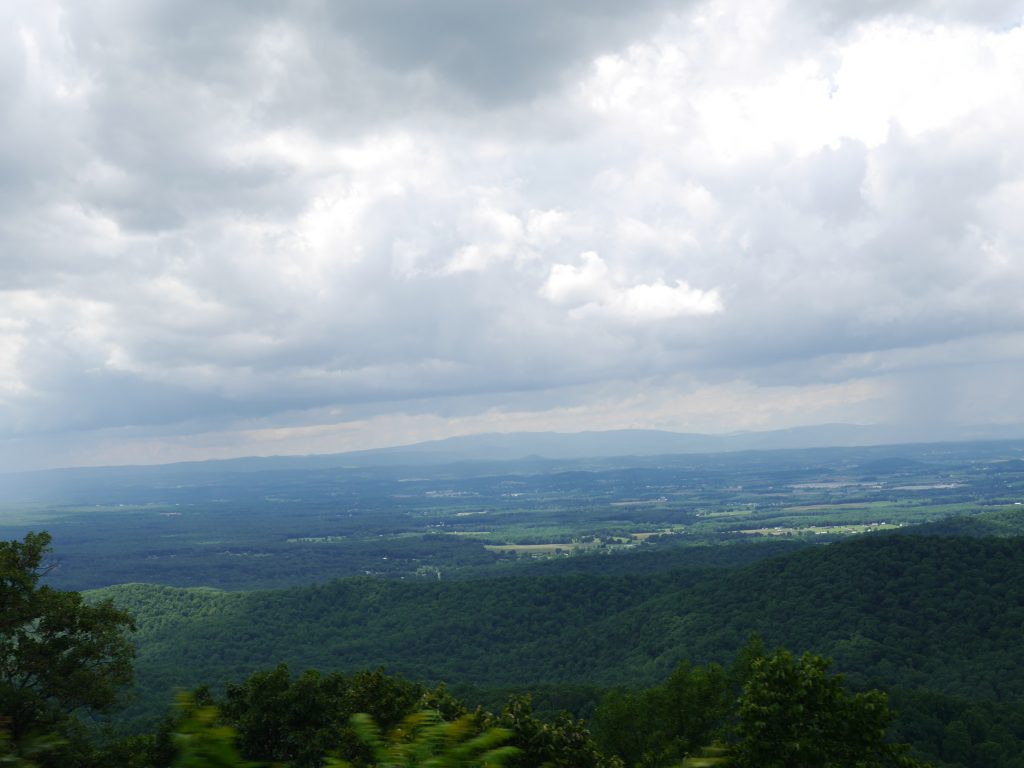 miles down Skyline Drive. However, if we were interested in heading to the south side of the park, he was concerned that our camper might not fit under one of the tunnels.

WAIT, WHAT? 7 miles? 20 miles? And that does not take you to the “other side?!” 80 miles? There is a separate south section? Why would there be tunnels?

I did not hear much of what he was saying after that first bit, I was fixated on trying to wrap my mind around how many hours, or days, it will take me to get to the other end of the park. At this point, you could have pushed me over with a feather. Not only am I entering this massive park today, but what the H-E-double-hockey-sticks did I just sign myself up for on this 7-week trip?! 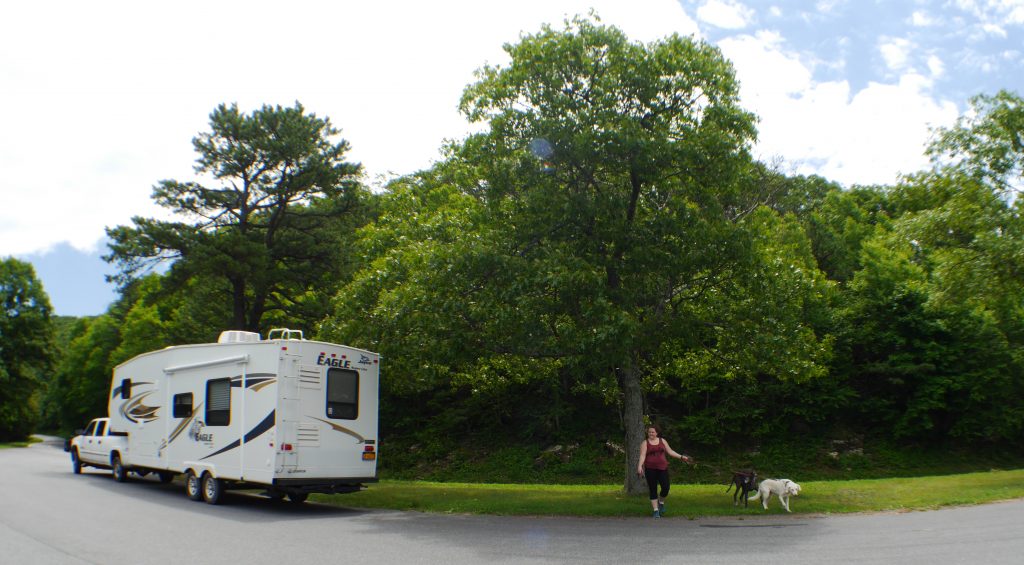 So, I’m sure you can guess that we drove the 20 miles into the park and skipped the 80-mile checkpoint with the other great view. At this point, there was a 1.2 mile hike to a clearing that gave you an amazing view. The 4 of us took off to see what it was all about.

I would love to tell you how spectacular the view was, but I have to come clean. We did not make it. The first hike on our first national park, and we turned around before we got to the end of the trail. Whop, whop, whop. The trail was just that- a trail. It had been cleared, but it was far from a “walking path.” Do not get me wrong, it was not by any means a “strenuous, scale a mountain” hike, but this was not a beginner’s hike. Another hiker on the way down informed us “you’re almost there, but there’s a storm coming up,” and that was enough for us to turn around and head back. In other versions of this story, I will say that we turned around because of Boseph’s arthritis and Lucy’s demands for a nap, but it is not exactly truthful- we all wanted to head back. 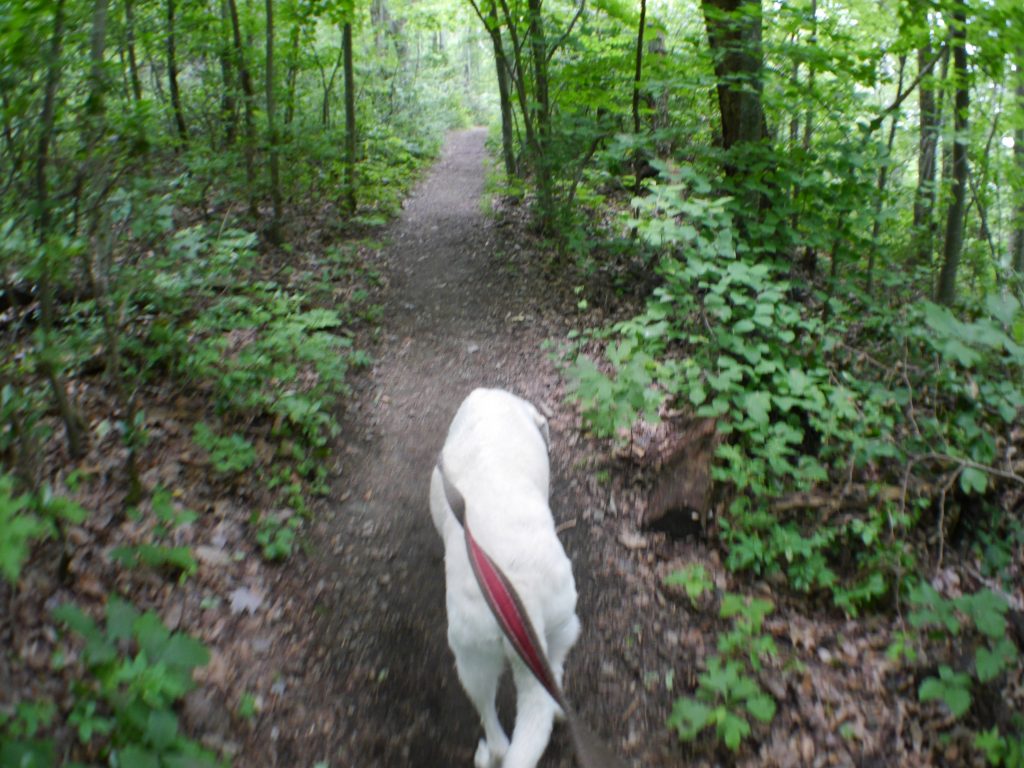 For me, I was looking forward to putting on a dry T-shirt; mine was soaked through. Yuck. We made it back to the camper without collapsing (ok, that is an exaggeration, we were really ok,) and rewarded ourselves with peanut butter and jelly sandwiches under a tree while overlooking a valley, a less impressive view but still spectacular none the less.

Satisfied to be in a clean shirt and having some lunch, I was still perplexed about how big this park was. So, to satisfy my curiosity, I present you with some fun facts about just how big Shenandoah National Park is, courtesy of the National Park Service (nps.org).

We traveled on a road called “Skyline Drive,” and it made sense, you can see the sky and the horizon for miles and miles, and it was amazing. As it turns out, Skyline Drive is a spectacular stretch of road going through Shenandoah National Park. It is 105 miles long and in 2017, 1,458,874 visitors travelled it. Once you park your car and get off the main road, you can enjoy over 500 miles of hiking trails (cue, The Proclaimer’s “I would walk 500 miles” as the background music), 101 miles of which are included in the Appalachian Trail. If you bring your horse with you (do not let Serenity know this, she is already muttered “horse camping” as a future possibility,) you and your stallion can navigate over 180 miles of horse trails as well. No horse required; the park offers guided rides in the spring, summer and fall at mile marker #41 (also, do not tell Serenity, we will have to turn back and do that activity.) As per nps.org, fishing, bike riding, camping, picnicking, swimming, bird watching, and wildlife observation are all activities you can enjoy in the park. They even mention a “Ranger Program,” which sounds like every little kid’s dream. Within the park, you can also find a gas station, 2 visitor’s centers, 3 lodges (with 285 rooms,) 6 “primitive” cabins, 5 food service outlets, 4 campgrounds, 7 picnic areas and a partridge in a pear tree. If you would like to host a meeting in the park, there are even 2 conference facilities as well. Go figure. 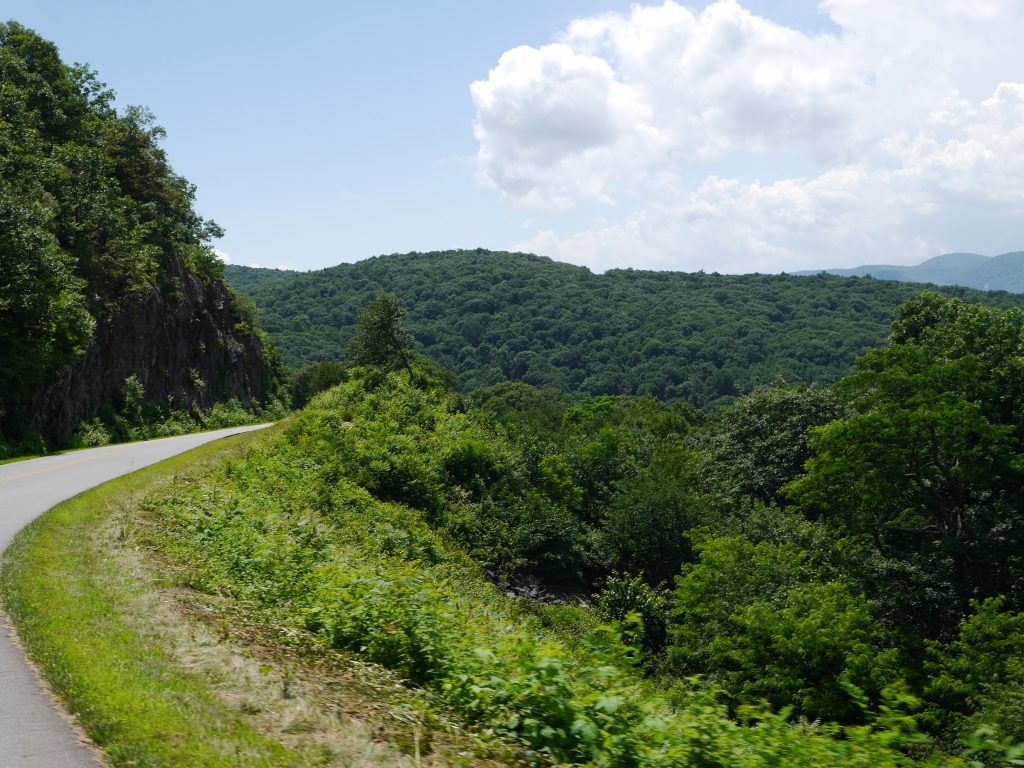 File these under the “well that’s interesting” category: While in office, Herbert Hoover built a summer camp within the park, which was known as the “summer White House.” (How was THAT allowed?) The last person to live in the park (yes, at the time when Shenandoah was designated as a park, over 400 families lived within the boundaries of the park) was Annie Lee Bradley Shank until she passed away in 1979 at the age of 92. Keeping in mind that over 400 families had been living in the area before it was declared a national park, as well as the countless generations of Native Americans that occupied the land before them,  there are cemeteries and sacred places within the park.

The entire park encompasses 197,438.76 acres of land spread across 8 counties. In total, there are 236 miles of paved roads with 75 overlooks (spots to pull off and take a look.) 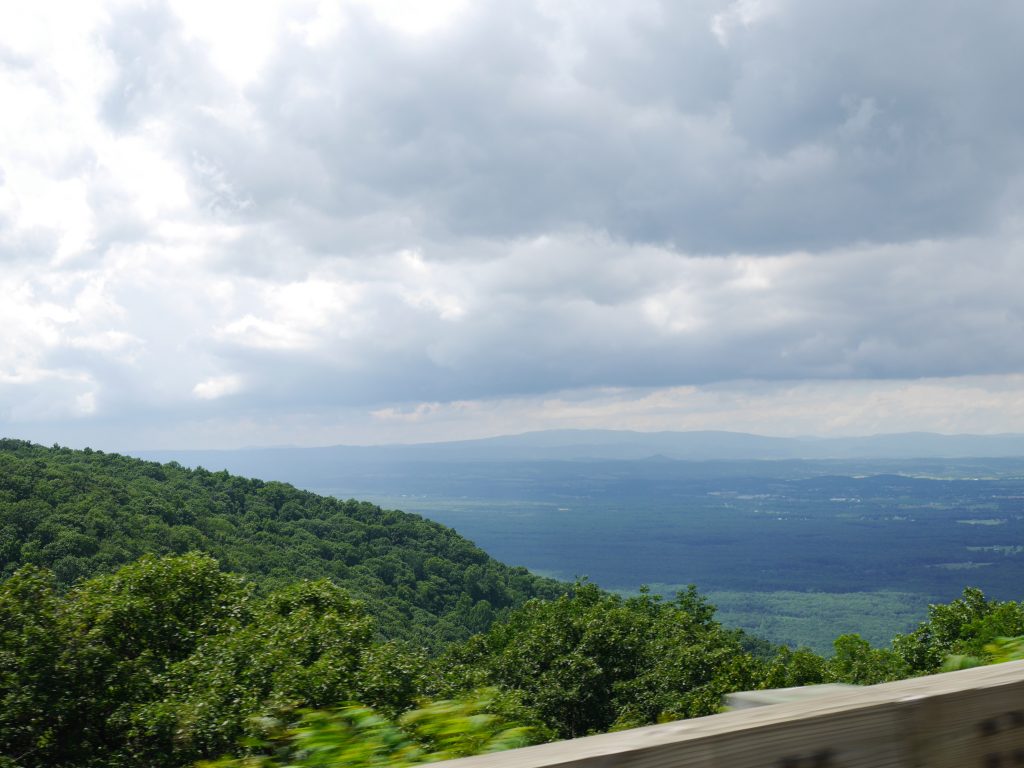 If you have read any of my other blogs, you’ll remember that I have a slight fascination with “it’s as big as” and “this fits in this” analysis. So, to satisfy my curiosity, turns out you can fit all 5 burrows of New York City (304.6 sq miles,) inside of Shenandoah’s 311 sq mile area. In another comparison, it is about 1/4 the size of Rhode Island.

Well, there you have it. To summarize, Shenandoah is massive and not for the faint of heart. After learning more about the park, it is natural to have follow up questions based on this new knowledge. More questions arise, such as “How did this become a park? Why is this a “park?” What is the fate of the park?” Some questions are easy to explain, whereas some are more difficult to answer and to justify. If you have thoughts, question, or comments about the park, let us know in the comments! We hope to talk more about these issues, questions, comments and concerns in later blogs and videos, so keep the conversation going!